Helping Residents with Their Bee Removal in Clearwater Florida

Our outstanding service of bee removal in Clearwater can’t be beat, call now for a free quote! 727-202-5086

On a beautiful day down in sunny Florida we had the pleasure of saving and relocating these bees from this outdoor light fixture. The bees were very docile and seemed to have not been there too long. Our prediction is this is a bee swarm that flew in and they’re actually getting ready to enter that wall through a little hole they found. You may ask why do we think they’re not building their nest inside the fixture? Bees need enough space to build and the void here isn’t enough space for them. 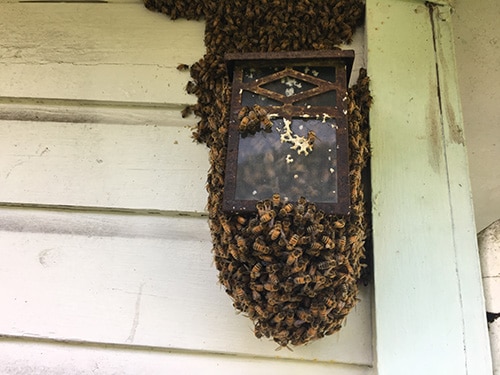 WANT SOME HONEY? GET YOUR JAR READY AND CALL NOW! Performing bee removal in Clearwater Daily!

How Honey is Made

As most people know the honeybee pollinates three quarters of the fruits, vegetables and nuts we eat. We definitely need these little guys around. Why don’t we call them zucchini bees, almond bees, or apple bees? Because they also make honey. One bee colony makes more than 50 kg of honey in a single year, which takes a lot of work Honey is made from nectar, but this sticky stuff isn’t in the flowers. The bees actually make it. Here’s how it works, when the bees find their food source They jump in and slurp the nectar with their long tong just like a dog does when drinking water.

Bees will make their way traveling miles and drinking from thousands of flowers to get just one full load of nectar to take back to their hive. Sometime the wight of the nectar they’re carrying is the same wight of themselves. The nectar turns into sweet honey in their tummy as they make their way back. Once she returns (all worker bees are female) she regurgitates into another worker’s mouth, this is an  important part of the honey making process. During this stage the nectar is watery so they bees flap their wings to create an air flow that thickens the honey followed by capping it with bees wax.

How Honey Preserves in the Hive

Because of low water content and the acidic pH that’s in honey it has an outstanding shelve life. Believe it or not honey has been found in Egyptian tombs that dates back thousands of years and was not spoiled & fine to eat. To produce a pound of honey thousands of bees will fly over three times around the globe and stop at up to 9 million flowers, it’s no wonder why honey is so expensive.

Bees communicate by dancing. They dance to tell where to find food or even if an invader is near. If a bee is walking while wiggling it’s body back and forth with wings flapping like crazy is actually telling the other bees which way to go. The longer they wiggle the farther the food source is. If the food is really good you’ll get to see a more rapid excited wiggle, almost shaking their body with excitement.

When a Queen is born she quickly kills her sister queens, there can only be one queen! When matting season arrives she will even fly to distant hives to mate with other males and store away the sperm. She then takes it back to her hive and colony to lay the eggs. Queens can lay 1000-3000 eggs daily through their entire lives. Unfertilized eggs will mature in to a male drone as the unfertilized eggs don’t join the sperm. So you guessed it, fertilized eggs are female. The first week of a queen bees life she mates with 20 or so drones or male bee (if she wants to create a male bee). Queens are important to a colony but so are the worker bees. Some may consider them the backbone of the colony.

How Bees Get Their Jobs

The honeybee is the most interesting insect in the entire world. Each hive consist of thousand of honey bees who work together to build and establish a colony. In every bee colony each honey bee has their own job. These jobs can be anywhere form searching for food to staying in the hive building the honeycomb. But how do the bees know what their job is? The queen, she not only can designate what gender of her children she also assigns her children to their jobs.

Drones have one job and one job only. to mate with the queen. they’ll even mate with queens from different colonies. The worker bees do everything else from cleaning the cells to care for the larvae, tend to the queen, guard the nest, and even feed the male bees when they beg for it. Each bee knows what to do because of the hormones that activate. The genetic makeup actually tells them what their job is.